We kick off our 2020 festival with a special Q+A with Hawai’i-based world champion surfer Carissa Moore, star of the new film, RISS, with discussion led by accomplished junior surfer Pua DeSoto.

Tune in for the live discussion here at 7:45pm (HST) 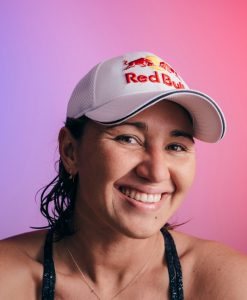 Local girl Carissa Moore  has established herself as a powerhouse in women’s surfing, a world champ who’s not afraid to compete against the guys and pull moves no other women are doing in the water. She’s had an accomplished career from a young age with a record 11 NSSA amateur titles, and at age 16, she became the youngest champion at a Triple Crown of Surfing event when she won the Reef Hawaiian Pro. At age 18, she became the youngest person, male or female, to win a surfing world title when she claimed her first World crown. Never one to turn down a challenge, that year Carissa also became the first woman to compete in Oahu’s Triple Crown of Surfing, typically an all-male event featuring the world’s best surfers. Carissa went on to take World Tour championship honors again in 2013. She then finished off the top step of the podium in 2015 where it required a monumental mental adjustment, but she sees it as part of the journey. Returning to her best form impressively in 2019, Carissa surfed to victory at Jeffreys Bay and Hossegor on her way to a memorable fourth World Surf League title after a four-year gap. She also went on to secure her place on the 2021 USA Olympic surf team. Additional information about Carissa can be found here. Photo courtesy Ben Thouard. 15 year-old Puamakamae DeSoto, the national champion from Mākaha, Hawaiʻi made history being the first athlete to win both the explorer womenʻs shortboard and longboard titles in last summer’s NSSA nationals at Huntington. According to Pua, the greatest honor of her career was being named the Buffalo Keaulana Waterwoman in 2018 after competing in nine events in this contest known as the waterman Olympics. She was the youngest honoree ever to compete against an open menʻs division in eight of the events, as acknowledged by Hawaiiʻs State Legislature. As a Native Hawaiian, Pua is clear on her kuleana (responsibility, obligation & privilege) to share the legacy of Hawaiʻi’s surfing genealogy. “We continue in old and new ways to define surfing, not just the sport, but our cultural practice,” reminds Pua. Pua is proud that she has volunteered over 1000 hours in her lifetime in nurturing the next generation of ocean stewards as a Nā Kama Kai Alakaʻi.

About the film:
Directed by Peter Hamblin. USA / UK. 2020. 41 min.
From Red Bull Media House and Hamblin Imagery comes an in-depth look at Hawaii’s own Carissa Moore, known for breaking barriers in her now-legendary surfing career. As a ruthless competitor who holds herself to the highest standards, Carissa became the youngest WSL champion in professional surfing and a four-time world titleist. Following her third championship in 2015, success was met with challenging years ahead. As other women dominated the podiums, Moore struggled to find her footing which caused a reevaluation in priorities. Centered around the 2019 World Surf League Championship Tour season and Olympic qualification, the film follows the Honolulu native’s journey in giving back, inspiring the younger generation and ultimately striving to be defined by more than the results.

RISS  ushers in a new phase of Carissa’s life while celebrating a comeback that was the culmination of years of emotional searching and hard-won personal strides. It captures a turning point in her career and how the 2019 title race unfolded as a result.