Nothing heightens one’s respect for the Great Wave off Kanagawa (c. 1830–1832), the most famous image in the woodblock print series Thirty-six Views of Mount Fuji by Katsushika Hokusai (1760–1849), more than awareness of how strongly it influenced other celebrated artists. 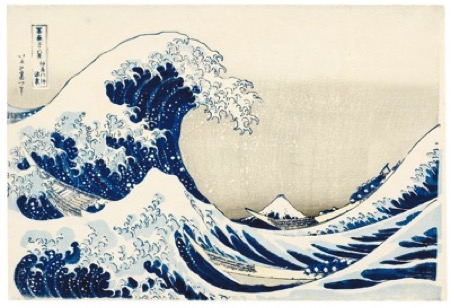 In order to fully appreciate the initial impact that this print had upon European painters, we should consider the French translation of its title: La Grande Vague de Kanagawa. In addition to “wave,” other meanings of the French word vague include “vagueness” and “imprecision.” Indeed, in the context of 19th-century French realist painting, which regulated how the form, shading, and color of a given object ought to be described, a wave presented artists with serious challenges. Its form is in a constant state of flux, and its translucency defies predetermined approaches to shading and coloration. As a result, painters were essentially forced to disregard their academic training, improvise, and emphasize their process of painting by leaving brush marks fully visible on their canvases–a practice that, under normal circumstances, was strictly avoided.

James McNeill Whistler (1834–1903) and Gustave Courbet (1819–1877) were among those painters who realized that the depiction of waves was an opportunity to liberate themselves from the constraints of realism. Among the seven or more seascapes, all entitled The Wave or The Waves, that Courbet was known to have painted around 1869 and 1870, the work currently in the collection of the Städel Museum in Frankfurt, Germany is perhaps most reminiscent of Hokusai’s print. Whistler’s paintings explored the marine theme over a longer time span, including works as early as 1862 (Blue and Silver–The Blue Wave Biarritz ) and continuing at least until around 1885 (Arrangement in Blue and Silver – The Great Sea ).

Whistler’s and Courbet’s efforts to incorporate into their seascapes a sense of dynamism and to simulate the refraction of light through water paved the way for modern art movements, particularly Impressionism, that focused upon such phenomena. It is worth noting here that in May 1872, years before the appearance of the word “Impressionism,” art critic Philippe Burty (1830–1890) coined the term “Japonisme” to describe the works of Claude Monet (1840–1926), Edgar Degas (1834–1917), and their compatriots. Certainly, these European painters drew inspiration from a wide range of Japanese art, but towards the end of the 19th century, as the movement evolved into Post-Impressionism, and as the expressive potential of intense pigments became a higher priority than the naturalistic depiction of light and color, Hokusai’s iconic seascape served all the more as their stylistic guide.

Vincent van Gogh (1853–1890), the most celebrated of the Post-Impressionist painters, described Hokusai’s Great Wave to his brother Theo in a letter dated September 8, 1888:

[The Great Wave by] Hokusai makes you cry out [“I did not know that one could be so terrifying with blue and green,”] but in his case with his lines, his drawing… you say to yourself: these waves are claws, the boat is caught in them, you can feel it.

The design of Hokusai’s Great Wave became an integral part of van Gogh’s iconography, and he utilized it in several of his most famous works. The background of Self-Portrait (1889), painted the year after van Gogh wrote the aforementioned letter, is composed entirely of wave shapes painted in bold strokes of blue and green. In combination with the artist’s stern countenance, the effect of this imagery is indeed unsettling. Even clearer influence of the Great Wave upon van Gogh’s oeuvre, however, is found in his masterpiece the Starry Night (1889), produced in the same year as his self-portrait. Not only are the swirling shapes in the night sky strongly reminiscent of Hokusai’s wave, but the artist decided to emulate the Japanese print designer by producing his composition almost entirely from shades of Prussian blue (ferrous ferrocyanide) with only slight amounts of yellow.

Just as the Impressionists realized that, in order to create an authentic landscape painting, they needed to leave their studios and immerse themselves in nature, likewise, in order to understand how these European painters became so captivated by Hokusai’s print, let me conclude with another French phrase: voir c’est croire.