Home
Stories
A Masterpiece in Miniature
Back to Stories

December 11, 1830 is the birthday of King Kamehameha V. In recognition of this special day, let’s take a look at a miniature portrait in the museum’s collection. This very small work on paper, whose oval image is only three-quarters of an inch tall, just about the width of a finger, is a beautifully detailed image of King Kamehameha V in his court uniform. This tiny engraved image is a die proof for a Kingdom of Hawai‘i postage stamp. 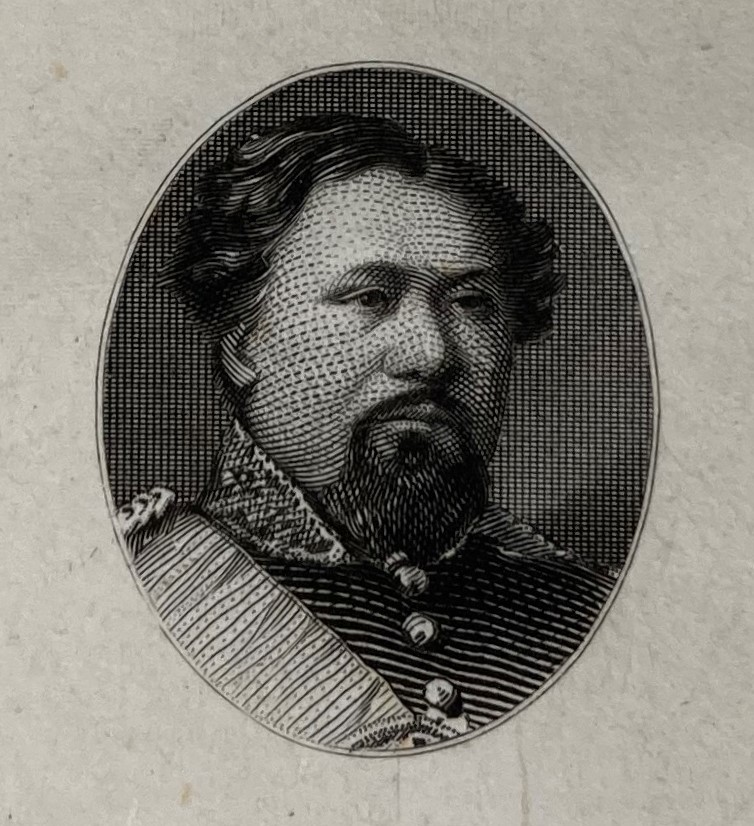 The six-cent stamp, first issued on February 11, 1871, was green in color and allowed a single letter weighing one-half ounce to be mailed to the United States. The stamp was part of a series of three stamps issued in 1871. Designed by Thomas George Thrum, well known for his Hawaiian annuals and almanacs, the stamp is believed to be engraved by Alfred Jones and printed by the National Bank Note Company of New York, which printed Hawaiian postage stamps between 1864 and 1878.

Lot Kapuāiwa, His Hawaiian Majesty, King Kamehameha V reigned from 1863 until his passing on December 11, 1872. He ascended the throne of the Kingdom of Hawai‘i after the passing of his younger brother, King Kamehameha IV, Alexander Liholiho (1834–1863). He did not marry and did not name an heir, so the Kingdom legislature elected his cousin, William Charles Lunalilo (1835–1874), as his successor. Kamehameha V is considered the last of the Kamehameha Dynasty.

As a young man, he traveled with his brother Liholiho and Gerrit Parmele Judd (1803–1873), Minister of Foreign Affairs at the time. The trio visited North America and Europe, preparing the two young princes for their future role in government. Imagine the sights they saw and the stories they collected during their travels. They wrote home often, using stamps from the various countries they visited. During the reign of Kamehameha V, visitors to Hawai‘i increased, thus necessitating a greater need for postage stamps to aid in communication.