Home
Stories
The Madonna and Child: the symbolism within a tapestry
Back to Stories

Christmas has many symbols—Christmas trees, wreaths, candles, candy canes, reindeer, elves, and, of course, Santa Claus. Begun as a Christian holiday, or holy day of obligation, Christmas uses religious symbols and iconography to tell stories of the season. As Christmas celebrates the birth of Jesus Christ, a popular symbol is the Madonna and Child, or the Virgin Mary and Christ Child (or Baby Jesus). The church would be uniquely decorated at this time of year, possibly with a special covering for the altar. The museum is fortunate to have a 16th century European tapestry that was used as an antependium, a hanging for the front of the altar, that depicts the Madonna and Child. 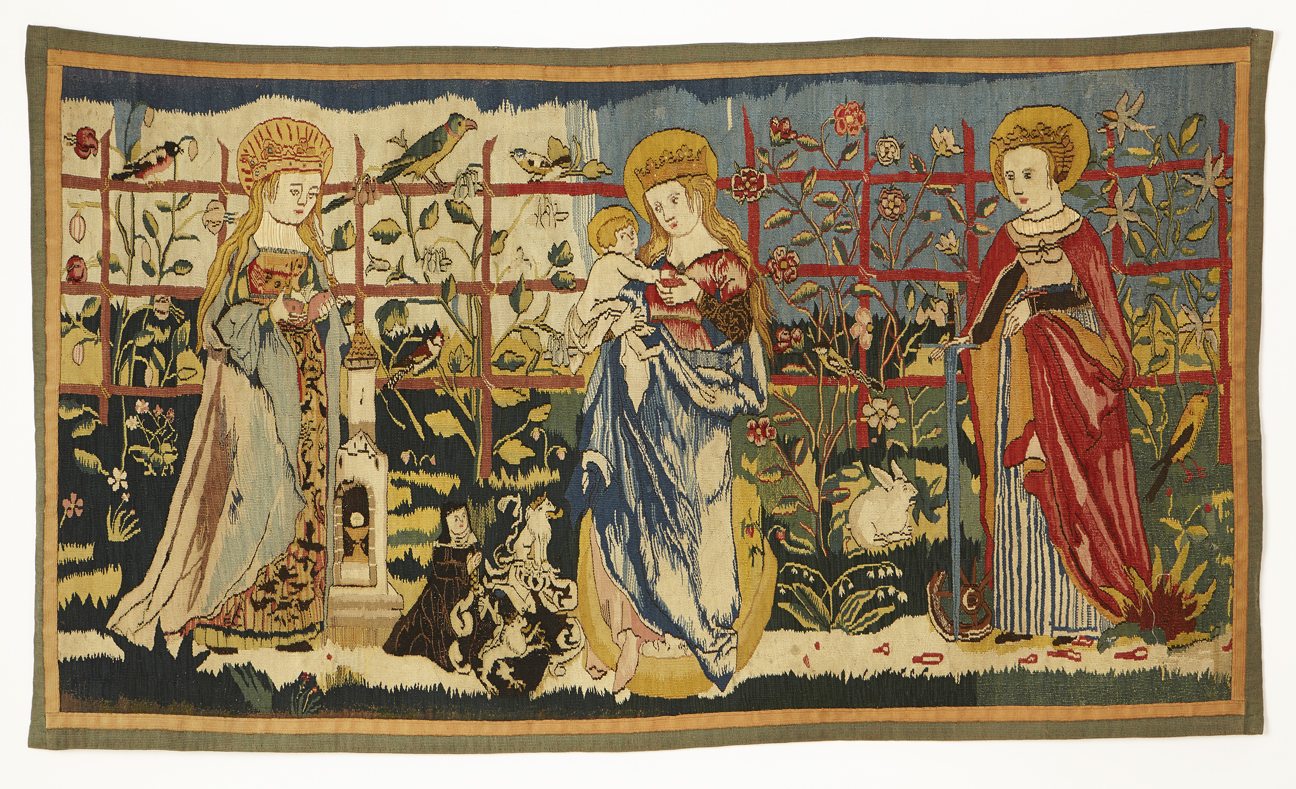 The tapestry depicts Mary holding the infant Christ; to the left is Saint Barbara, to the right is Saint Catherine of Alexandria, and all four are depicted with halos. The figures are in a garden setting in front of a trellis entwined with flowers such as roses and lilies, on which are perched a variety of birds. All this provides rich symbolic imagery and decorative appeal. It is believed that the composition was taken from a German print of the period.

How do we know who the people are on the tapestry? By looking for the symbols that represent specific individuals. Saint Barbara, a second century martyred saint, is represented by a female next to a tower. She was locked in a tower by her non-Christian father to guard her against the world. After pondering about the beauty of the world, she secretly became a Christian. When told by her father to take a husband, she professed her Christianity and refused marriage. Because of her faith, she was tortured and eventually beheaded.

Saint Catherine of Alexandria, a fourth century martyred saint, was believed to be intelligent, learned, and of noble birth, and possibly a princess. She is depicted with her hair up and dressed fashionably of the period, befitting a princess. After receiving a vision, she became a Christian and protested the persecution of Christians by Roman Emperor Maxentius through debate with Roman scholars. Catherine was eventually imprisoned, tortured, and sentenced to death. Her execution was to be by a spiked wheel, but when she touched the wheel, it shattered; she was then beheaded. She is often symbolized by the broken spiked wheel and sometimes shown with a sword representing her beheading.

There is also a small figure of a nun, dressed in her monastic habit and wimple, which represents the donor of the tapestry. As the nun kneels beside the coat of arms of the von Oberkirch family, she is identified as Amelie von Oberkirch, who was a nun from 1527 to 1543 and abbess between 1543 and 1568. As she is represented without a crosier, the staff used as a symbol of position in the church, the tapestry must have been made prior to 1543. This tapestry is believed to have been woven by the Benedictine nuns in the Abbey of Saint Jean in Saverne, France, where a similar version is still preserved.