Home
Stories
The Treasure Ship: bringing good fortune for the New Year
Back to Stories

As Lunar New Year approaches on February 12, one of the many symbols traditionally associated with this time in Japan comes to mind: The Treasure Ship (takarabune). This ship, believed to set sail annually in the first few days of the New Year, carries the Seven Gods of Good Fortune as they bestow their blessings on the world. Since HoMA has the largest assembly of artworks by Utagawa Hiroshige in any public collection, it comes as no surprise that we have a woodblock print designed by the artist on this very subject, undoubtedly made to celebrate New Year.

But, doesn’t Japan celebrate the New Year according to the Gregorian calendar? Yes, but this didn’t happen until the Meiji period (18668-1912). When Hiroshige created his print, the transition to observing this calendar was still more than a decade away. Perhaps even more surprising, is that only one of the Seven Gods originated in Japan, and they are a startling diverse group.

Bishamonten, who sits dressed as a warrior at the stern, was introduced into Japan through Buddhism. He is one of the principal protector deities of the four directions, often found flanking the Buddha in Japanese temples. His name is a Japanese transliteration of the original Sanskrit Vaishravana, providing him with a certain degree of exotic mystery appropriate to his foreignness. In front of Bishamonten sits Daikokuten. He wears a distinctive cap and rests his hand on a mallet. His bag of treasures and the rice bales on which he usually stands—complete with munching mice—are hidden by the ship, but all Japanese would have recognized these as completing his iconography. However, this appearance is unique to Japan. The rest of the world knows Daikokuten, whose name means “Great Black One,” as Mahakala, the god “beyond death,” a wrathful manifestation of the primary Hindu deity Shiva. In Hinduism and Buddhism (he is worshiped in both religions) Mahakala is typically shown with a fierce face, fangs, multiple arms, and a crown of skulls. Benzaiten, the one goddess of the group, similarly comes from Hinduism, where she is the deification of a river with the same name, Saraswati. The first part of her name can mean water and speech, and consequently, she is the goddess of learning, music, and art. Unlike Daikokuten, who appearance changed dramatically in Japan, Benzaiten retains some of her original significance. She is often holding a lute (which is presumably hidden somewhere in the ship, perhaps being played by Daikokuten’s mice). 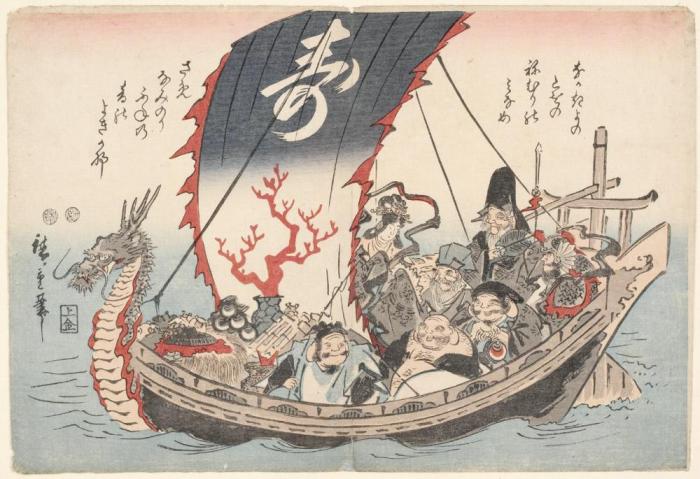 The next three gods come from China, starting with Jurōjin, the god of longevity. Originally associated with the southern pole star, he is depicted in China and Japan as an elderly man with an exceptionally elongated cranium, depicted here covered by a hat for sea travel. He sits next to Bishamonten, in the stern, and one wonders if the magical deer on which he usually rides might be somewhere in the cargo hold, probably not enjoying the journey. In front of Jurōjin sits Fukurokuiu, and here is where things start to get confusing. In China, Fukurokuiu was three gods: The God of Fortune (fuku), the God of Emolument (roku), and the God of Longevity (ju) —the latter of whom is the very same Jurōjin sitting behind him! These gods, originally all stars in the heavens, were so ubiquitous in Chinese popular religion that they came to be known as a group whose names are abbreviated into a single phrase. When there were introduced into Japan this was misunderstood as referring to a single deity. The Chinese delegation is rounded out with Hotei, who started out as a monk in China during the 10th century. Later, his prominent belly, smiling face, and overall indulgent demeanor came to be associated with the bodhisattva of the future, Maitreya, who had a similar appearance, and the two were essentially conflated in Japan into a single, happy, satisfied, lucky god.

Appropriately, the one Japanese god, Ebisu, sits in the front leading the way, Ebisu is an ancient Shinto deity, but he eventually came to symbolize prosperity, including abundance from the sea. This is indicated here by the fishing pole he leans over his shoulder.

This year as the Seven Gods of Good Fortune sail around the world bringing new hope, they will face unique challenges due to COVID travel restrictions. Let us hope that, as with Santa Claus, Dr. Anthony Fauci, and other infectious disease specialists will vouch for them, and encourage our governments to let them pass unrestricted!