Home
Stories
Almost nirvāna with arhats
Back to Stories

Newly on view in HoMA’s Pan-Asian Buddhism Gallery are paintings from the permanent collection depicting eight of the sixteen arhats. Who were the arhats? Arhats were believed to be original followers of the Buddha Shākyamuni in India, and became the focus of a cult in Mahāyāna Buddhism. Traditionally, arhats organized themselves in groups of sixteen, eighteen, even five hundred. In Japan, where most of these images are from, they are referred to as rakan, and groups of sixteen arhats were most common.

“Arhats were conceived as beings of exceptional transcendent wisdom (prajña) who had gained enlightenment through their own efforts but had not yet entered the state of Nirvāna,” said Shawn Eichman, HoMA Curator of Asian Art. “Thus, they were believed to exist in the phenomenal world, having transcended all worldly bonds and freed themselves from the cycle of birth and rebirth.” 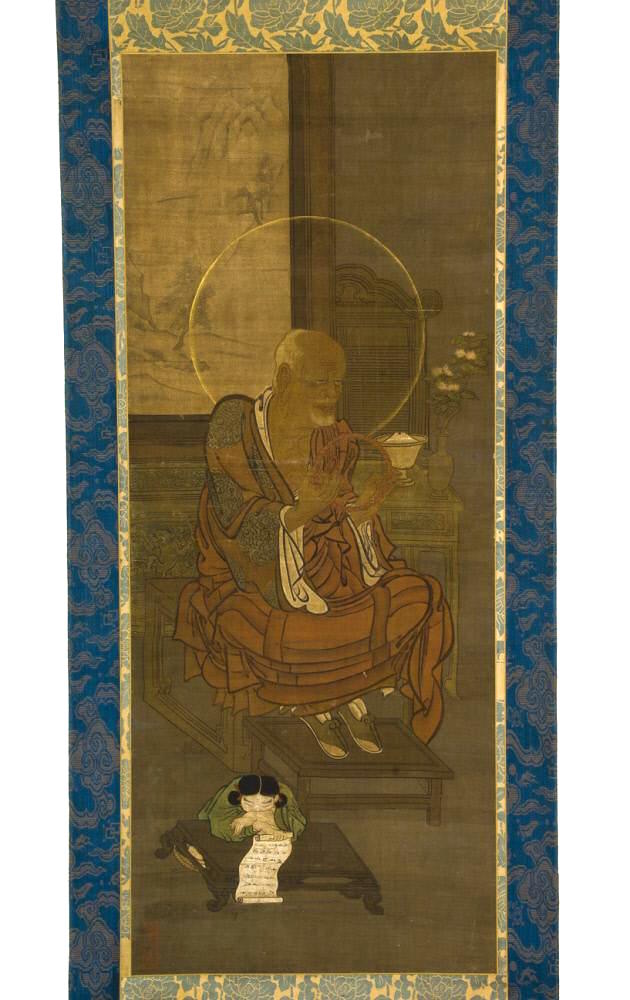 One of the eight arhats featured is Bhadra, shown here in this hanging scroll from the Nambokuchō or early Muromachi period (c.1350–1400) chanting and turning a rosary in his hands. He is recorded as having been a great magician. “On close inspection, you will see that his young attendant has an ancient Chinese hairstyle,” said Eichman. “This is telling as it reveals the Chinese origins of earlier Japanese arhat paintings.”

Most of the handscrolls on display are Japanese in origin, but there are also selections from China’s Ming Dynasty (16th–early 17th century) included. One particular painting, Celestial Immortals, is accompanied by a lengthy inscription by the Ōbaku monk Dokuryū Shōeki (1596–1672). Dokuryū fled the collapse of the Ming dynasty, arriving in Japan in 1653. He was admired as a seal carver and calligrapher and for his skills in medicine. “He served as a scribe to the first abbot of Manpukuji but also spent time as an itinerant monk traveling throughout Japan,” said Eichman. “His inscription on this painting indicates that the painting was in Japan by the middle of the 17th century, and may have been brought there by a Chinese monk refugee.”