Home
Stories
Beauty in imperfect conditions: in memoriam of artist Rio Suzuki
Back to Stories

The exhibition Mace and Long: Artists in Our Collection is on view now through Saturday, June 26th at the Downtown Art Center. One highlight of the show is the work of Noriko “Rio” Suzuki, who passed away on February 9, 2021. In addition to being an extremely talented artist, Rio was a beloved member of the HoMA community and worked as a library assistant in the Robert Allerton Art Library for several years. 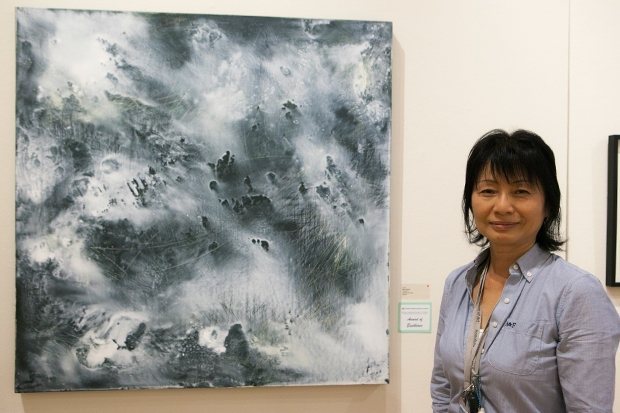 Rio was part of a wave of female artists who, under the guidance of instructor Reem Bassous, rose to prominence in Honolulu during the 2010s. One highlight of that decade was the exhibition Mujō: Aesthetics of Impermanence, which Rio held at Koa gallery with her friend and fellow alumnus Yumiko Glover in 2018. The energy that emanated from those works by Rio, including large-scale, three-dimensional installations, could hardly be contained within the confines of that exhibition space.  It’s a cruel irony that the theme of that exhibition was the Buddhist concept of impermanence, because three years later, here we are, wishing there was a way in which we could have frozen the hands of time and basked in the glory of that moment.

Rio’s brief yet prolific career as a painter began at the University of Hawaii Manoa, where she earned a BFA degree in 2011. From her senior year, she began to enthusiastically exhibit her work at venues throughout Honolulu, including Pauahi Tower in Bishop Square and Koa Gallery at Kapi’olani Community College. Moving to the mainland, Rio continued her studies at the Art Institute of Boston and ultimately received her MFA from Lesley University, College of Art and Design in 2015. Shortly thereafter, she returned to Honolulu and began her job at HoMA’s Robert Allerton Art Library.

Continuing to paint and exhibit, Rio quickly gained attention as a rising star in the Honolulu art community. In 2016, she received the Best in Show Award at the 38th Annual Commitment to Excellence Exhibition, held at the Honolulu Museum of Art School and sponsored by the Honolulu Japanese Chamber of Commerce. The following year, her work was featured in the exhibition Abstractions in Paint, Wood, and Fiber at HoMA First Hawaiian Center gallery.

In her artist statement for the First Hawaiian Center show, Rio wrote, “I have been exploring the idea of finding beauty in all kinds of situations, especially in unstable and imperfect conditions.” Her process of using acrylic paint and water was largely improvisational and relied on chance, thereby offering unexpected and surprising results. She composed her pieces by splashing wood panels with diluted paint, which she sometimes mixed with substances such as calcium carbonate. She then let the paint move around on the surface until it dried. The resulting abstractions evoked both macroscopic structures–clouds or galaxies–as well as microscopic organisms such as moss or mold. The textures that Rio carved into her works enhanced their sense of depth. Regarding this process of working, she explained, “I patiently wait until [the painting’s] own beauty comes out onto the surface.”

The exhibition at the Downtown Art Center (1041 Nuuanu Avenue, Ste B, Honolulu, HI, 96817) runs through Saturday, June 26th. Gallery hours are Tuesday through Saturday from 11 a.m. to 6 p.m.. Rio’s artwork can also be viewed on her website, riosuzuki.com.

Posted by Maggie Engebretson on June 14 2021