Works from HoMA’s collection of 17th- to 19th-century Indian miniature paintings will be on view in the Jhamandas Watumull Gallery of Indian Art starting March 11. The theme of this particular display will focus primarily on one of the principal Hindu deities, Krishna.

Miniature paintings are just that: tiny paintings defined by incredibly delicate brushwork, illustrated on a range of materials like palm leaves, paper, wood, marble, ivory panels, and cloth. They were created primarily as manuscript illustrations but were removed from their books by later collectors, mostly foreigners who couldn’t interpret the books’ languages. HoMA has nearly three hundred Indian miniature paintings in our permanent collection. “Miniature paintings are a rich subject with a lot of nuance,” said Shawn Eichman, HoMA Curator of Asian Art. “They were a courtly art, and at this time there were regional courts in many parts of India, with some rulers maintaining studios of artists.” When the British colonized India, the courts lost their influence and the genre eventually went into decline.

Believed to be a manifestation of the supreme deity Vishnu, Krishna’s adventures are chronicled in the Mahabharata, the Bhagavad Gita, and the sacred collection of texts known as the Puranas.

While most of the pieces in the rotation focus on Krishna, one of the works titled Rama and Sita Looking in a Mirror depicts the story of Rama and Sita from the epic poem Ramayana. 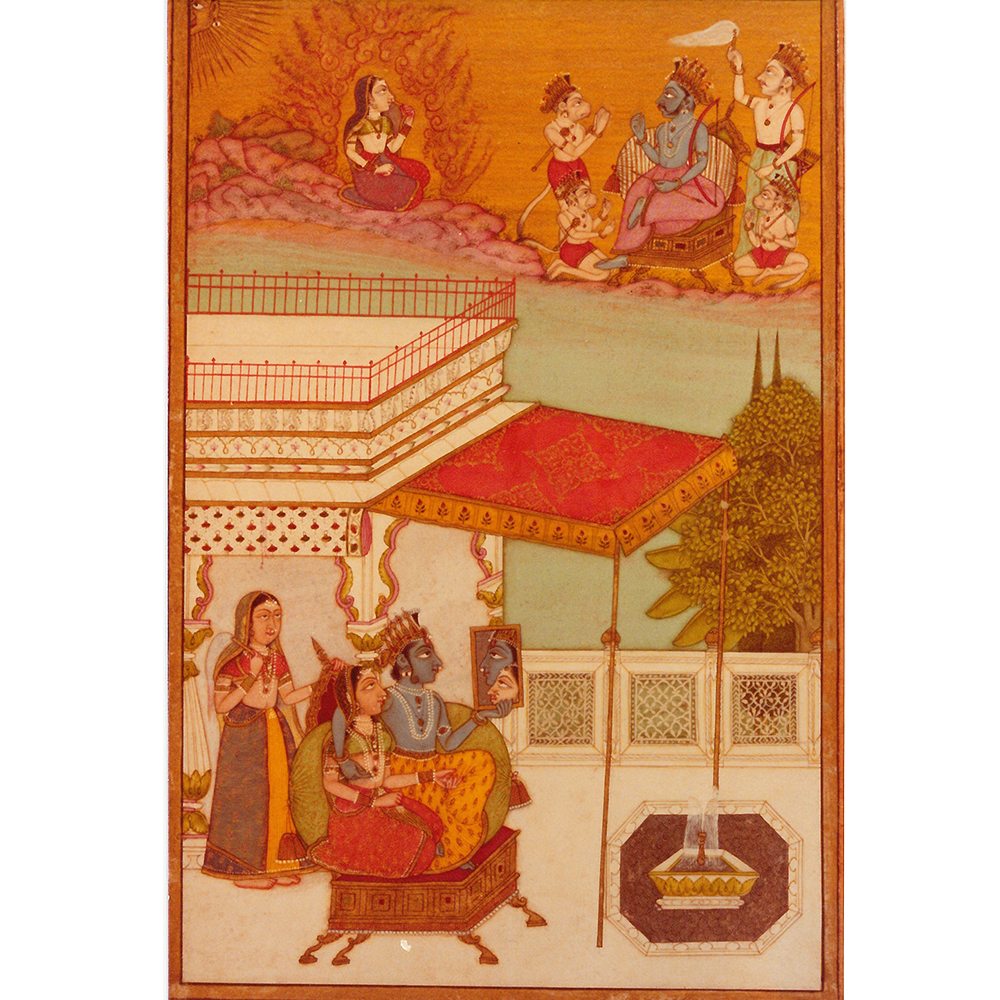 In the painting, several portions of the Ramayana are illustrated. Rama and Sita are shown together in the palace before their exile at the bottom of the image. They sit facing a fountain near an elegant white marble pavilion, while an attendant looks on as they enjoy their own reflection in a mirror. The right corner depicts their period of exile with Rama sitting on a chair, fanned by his brother Lakshmana, while Sugriva and other monkeys honor him. In the upper left, Sita is shown surrounded by flames referencing an incident when her faithfulness to Rama was questioned, and she proved herself in a trial by fire. Sadly, she was exiled even after she was shown to be innocent.

“The Ramayana is one of the most important works of epic literature in South Asia, with an influence that extends far beyond India. Stories from the Ramayana can be found as well in performance art such as dance and theater across Southeast Asia,” said Eichman. “HoMA is honored to have several Ramayana illustrations in our collection, and because Rama, like Krishna, is also an incarnation of Vishnu, we decided to include this particular piece.”

Posted by Tricia Marciel on March 8 2021