Home
Stories
Revisiting “In Stillness” with Kamran Samimi
Back to Stories

Artist Kamran Samimi grew up on Hawai‘i Island, and received a BFA in printmaking in 2010 and an MFA in sculpture and print media in 2016 from the University of Hawai‘i at Mānoa. He finds inspiration from a range of sources and cultures, and was an artist in residence at the Shangri La Museum of Islamic Art, & Design from January 2020 – February 2021. Samimi’s solo exhibition, In Stillness, opened in October 2020 in HoMA’s Arts of the Islamic World Gallery, and will remain on view through August 15, 2021. We sat down with the artist to learn more about his process, practice, and the layers of meaning behind his work. 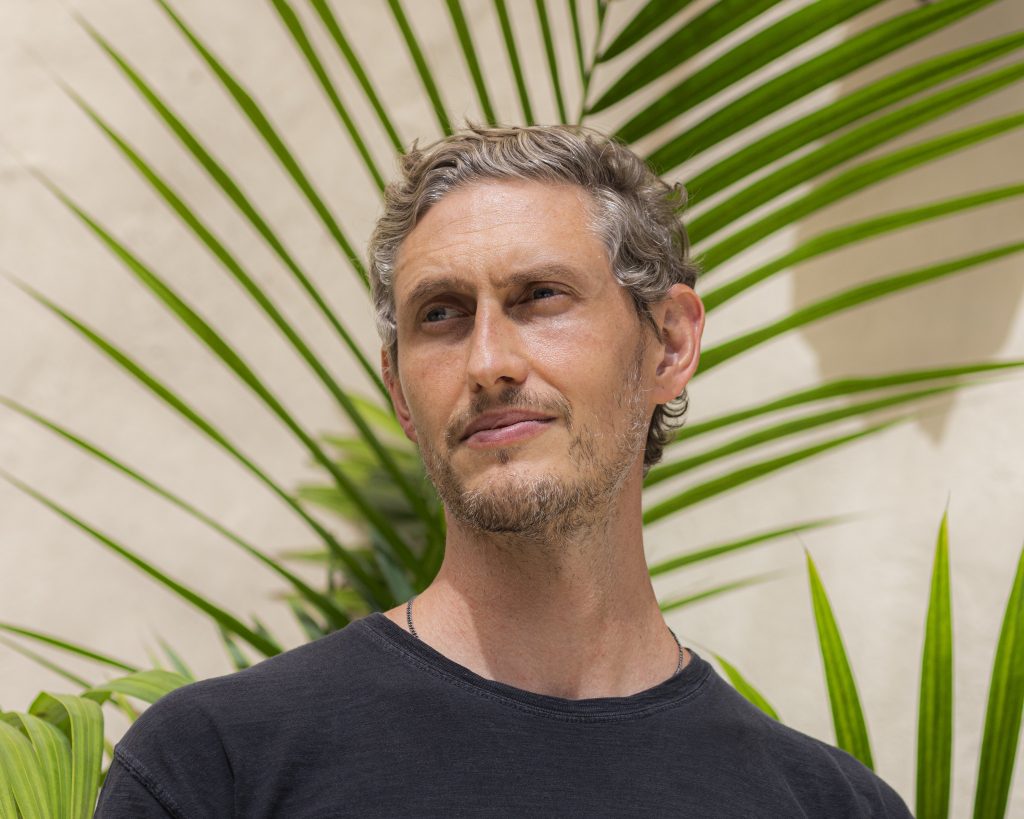 To Kamran Samimi, each of the works in In Stillness are visual meditations. The calligraphic ink paintings and large-scale paper sculpture in the exhibition are born of his process exploring “the fact that as an aspect of nature and part of this changing universe, I’m changing too.” He describes these works as pared down, austere and simplified—but explained that within that simplicity is a connection to things that are more universal. “Something I’m always seeking to do is to use the simple to explore the complex,” Samimi said. “The works give form to that which has no form: what does breath look like? What does time look like? What does change look like? It might look like this.”

A central focal point in the gallery is the sculpture Emanation, made using washi, a handmade Japanese mulberry paper. Samimi has been using washi as a medium for a number of years: his first exposure to the paper was through printmaking, then visiting Japan to see how it’s made, and taking papermaking classes at UH Manoa. “I love the texture and unevenness of washi paper. It lends itself so well to sculpture and connects to my interest in using stone as a sculptural material.”

Before assembling Emanation, he crumpled and wrinkled the washi first, giving the paper added dimension. “Part of it was to give the paper more presence. I wanted to take something like paper—fragile, thin, and lightweight—and make it more physical, more textured, more stonelike, more mountainous.” He explains that the act of wrinkling itself is another form of meditation and connection. “Countless hands have touched objects that we use every day. We don’t know any of those hands or the journey of something that’s made across the world like that paper,” Samimi said. “I want to connect to these people from afar, in a silent way. By constricting and releasing the paper [to create wrinkles], I become part of that material’s story, and my hand, my touch connects with theirs.” 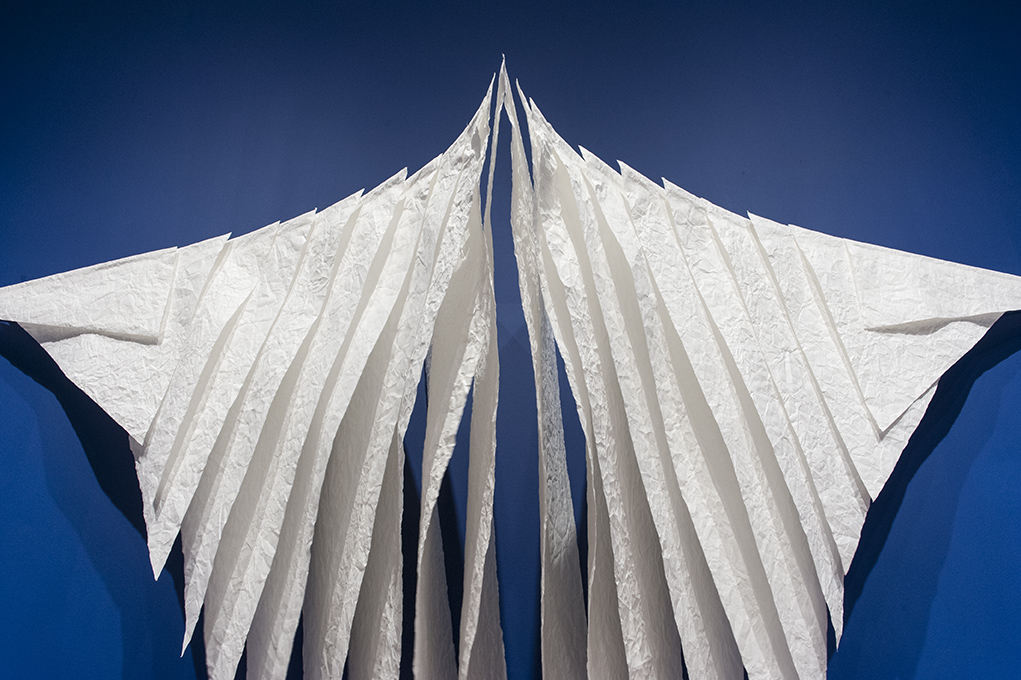 Samimi titled the series of ink paintings Continuum, each of which act as meditations commemorating the passage of time. He synchronized each brushstroke with a single breath as a way to mark time, as well as a way to connect with something bigger. “In a sense, those works were about the moment of time in which they were created,” he explains, “but also that that moment is connected to all other moments. Each stroke took place during a single breath and a single moment. The series could potentially be infinite.”

Spending time in Japan’s shrines and temples reflecting on calligraphy made a significant impact on the way Samimi thinks about calligraphic forms. “It’s not so much the meaning behind the words,” he said, “but the process and thought behind it. It’s about the breath, and it’s about mindfulness.” 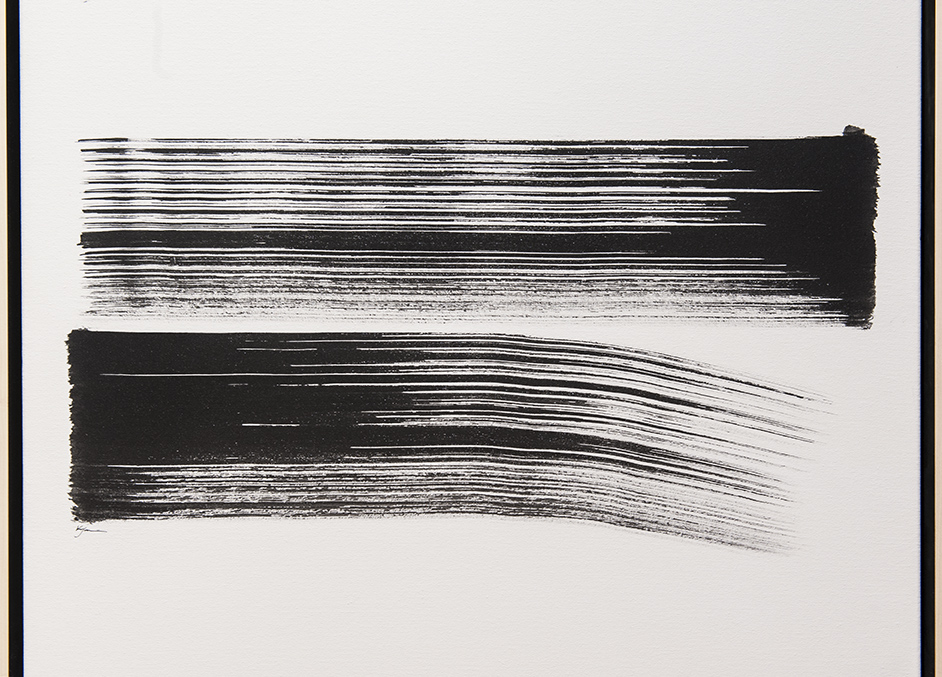 The ideas of breath and change are present in the form and movement of Emanation as well, something that Samimi explains was intentional. “That piece breathes,” he said. “It’s also a meditation on change and the passage of time. To me, that sculpture has a spirit of its own, it pays tribute to that which we are connected to and a part of—the Spirit of Nature, The Source manifested in physical form—that’s what I wanted to create and instill into the work. The shape of the piece is dynamic, almost like a snippet of a wave form, and perhaps it continues in both directions infinitely. We’re just part of it for this instant.”

To Samimi, the title In Stillness carries layers of meaning. The first, of course, is that the works create a quiet, reflective space in the gallery. “But if you spend more time with them,” he says, “the works move, they vibrate, they have a pulse—so they’re not as still as they initially seem.” Samimi believes that within stillness, there is motion, and explains that each of these works were born out of motion: the brushstrokes are “action, motion, presence, absence.” He said, “The paper piece moves constantly within the paper’s surface and the air currents, and the shape is dynamic. “It’s quiet, but it’s not quite still. And to me, that’s how life is: finding stillness in motion, and motion in stillness.”

Emanation and the Continuum series are on view at HoMA through August 15, 2021. “I’m happy to share these works with the world.” Samimi said, “Especially at HoMA, with which I have such a long connection. If others can see a bit of themselves in my work, then I’m happy. But it’s not always easy, especially when working with the subtle and the abstract. My work is about the personal and the universal, and occupies the place where the two meet. It asks a lot of you, and you have to be willing to spend time with it.”

What’s next for Samimi? The mixed-media works in his exhibition Sanctuaries, the result of his year-long residency at Shangri La Museum of Islamic Art, Culture & Design can be viewed online.

In Stillness is a collaboration with Shangri La, Museum of Islamic Art, Culture & Design.

Posted by Maggie Engebretson on August 2 2021