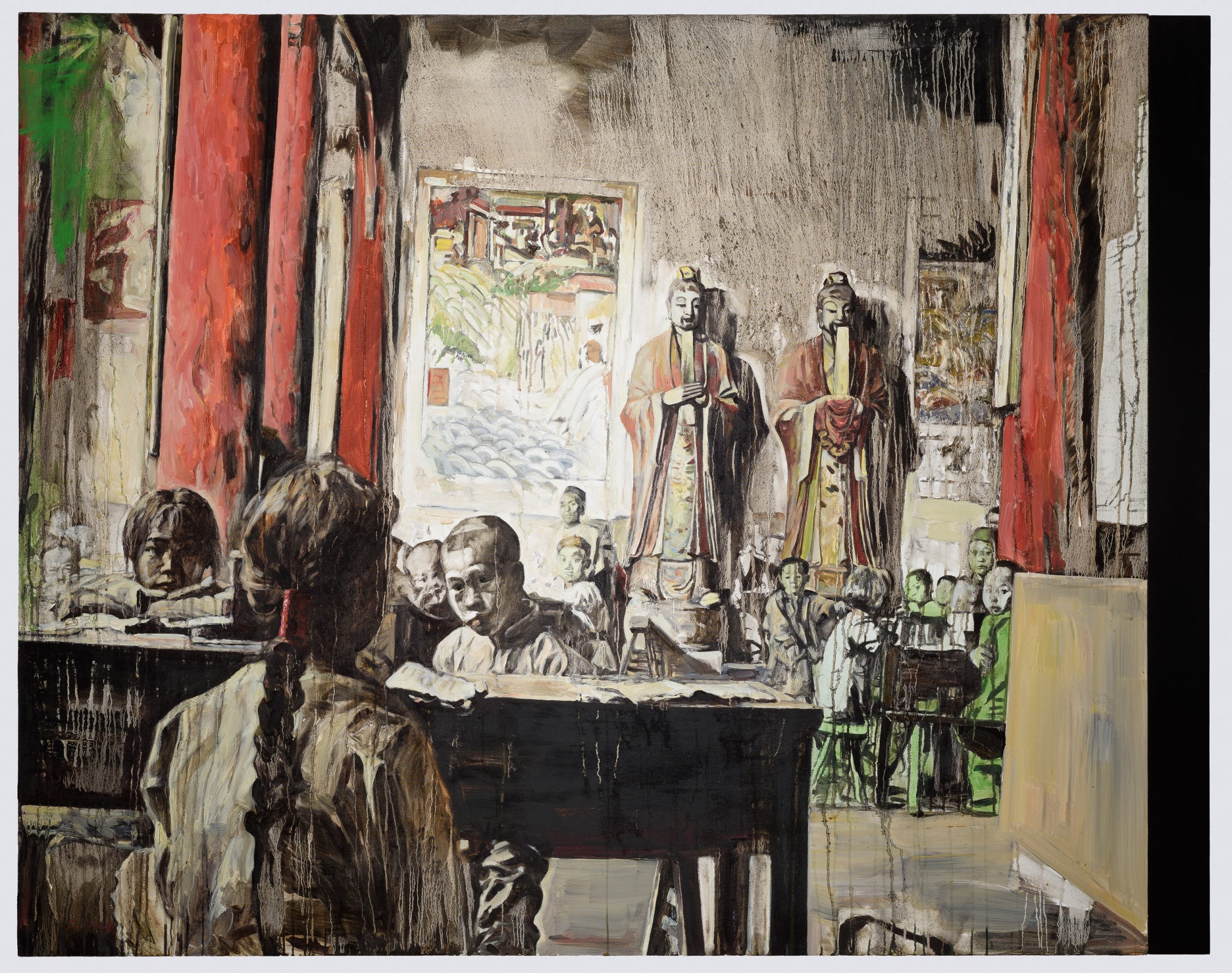 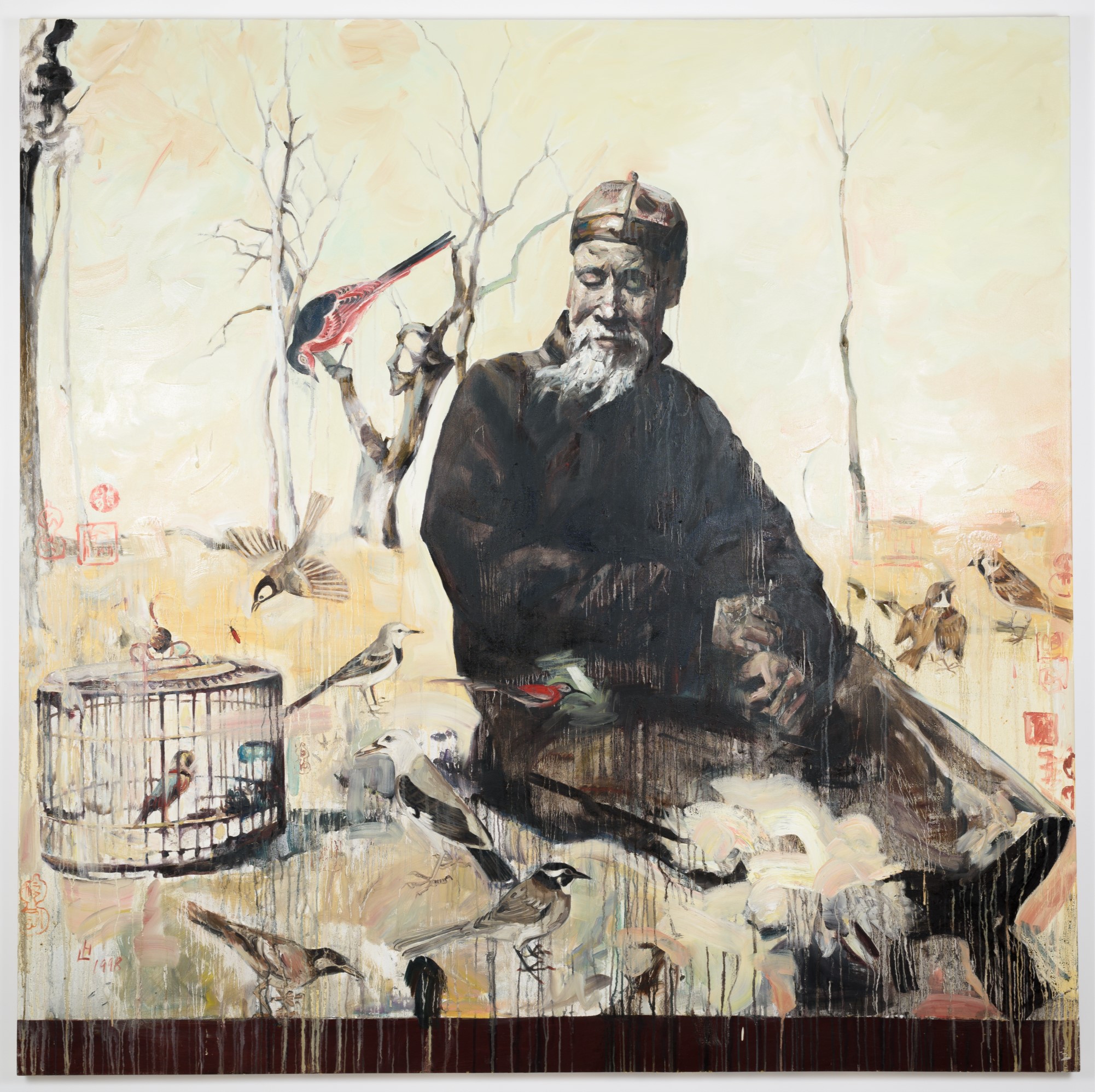 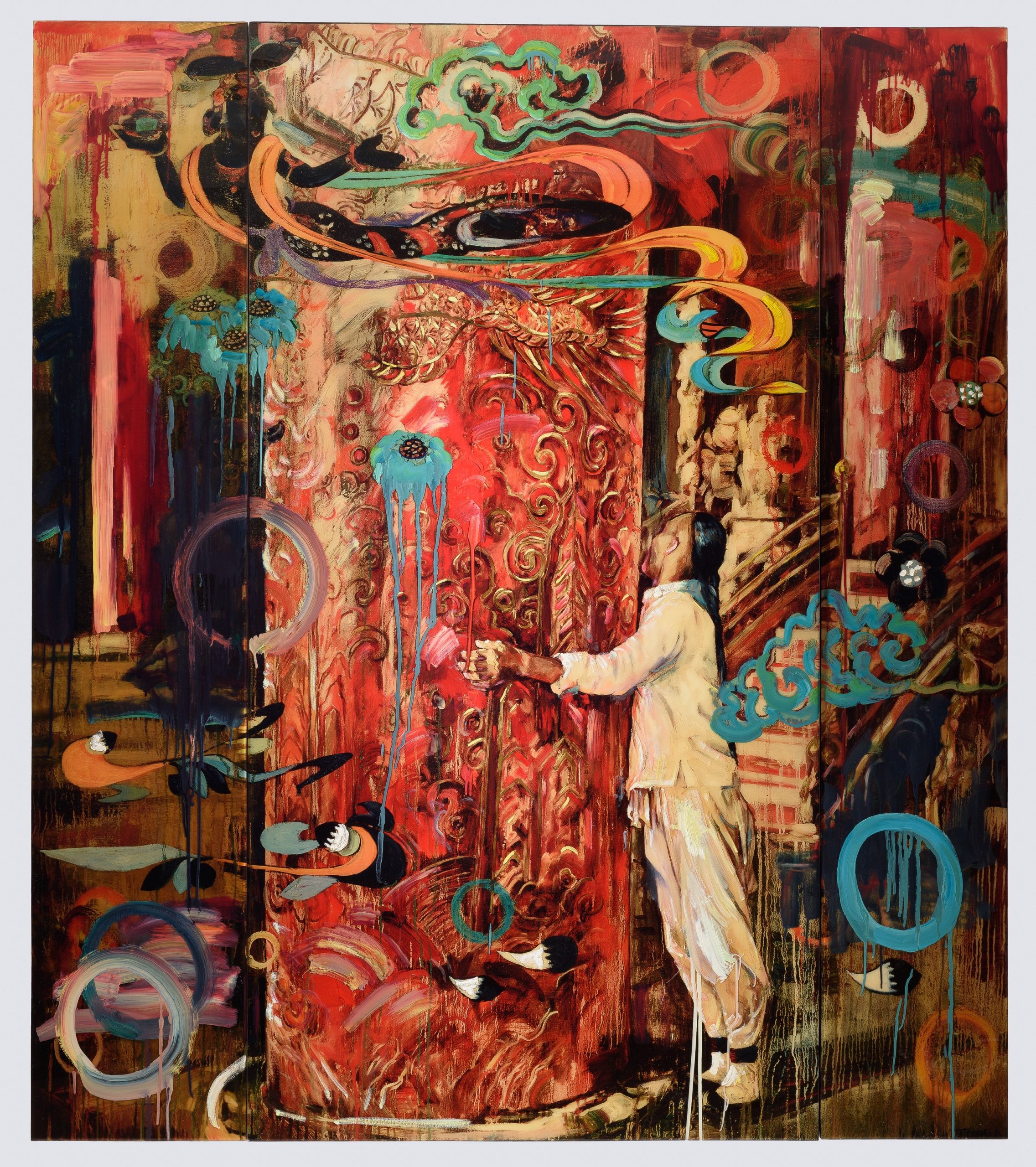 The Honolulu Museum of Art (HoMA) has added three works by contemporary artist Hung Liu (American, Chinese born, 1948-2021) to its permanent collection. Known for working from historical photographs, Liu drew from China’s long history and her own experiences to represent people who had historically been invisible or marginalized. The three large-scale paintings—Temple School (1996), Reverie (1998) and Imperial Pillar (2011)—are strong examples of Liu’s signature, loose painting style, which allows for thin washes of linseed oil to drip down the surface of the canvas suggesting tears, or the passage of time and memory.

Temple School (1996) features children sitting and studying at tables within a traditional Chinese temple school setting. As is typical with Liu’s portrait work, the children are depicted as individuals with distinct characteristics, who have taken a momentary break from studying to direct their attention to the front of the room. The incorporation of linear perspective speaks to Liu’s interest in Western pictorial traditions and to photography.

Reverie (1998) depicts a bearded figure in robes and traditional Chinese cap surrounded by birds. For Liu, the birds may signify sparrows killed during Chairman Mao’s infamous Four Pests Campaign, and serve as warnings of impending catastrophe or as echoes of past disasters.

In Imperial Pillar (2011), a figure in white spreads his arms, as if in an embrace, around an intricately carved red column. In Liu’s mixed media pieces from this time, printed elements were attached to a wood panel, then covered in a transparent and glossy resin. After the resin dried, Liu painted into the figurative sections and added surface decorations and designs. The layered imagery underneath and on top of the shiny resin contributes to a heightened sense of depth and light.

“The addition of these works by Hung Liu reflects the museum’s ongoing commitment to expand the diversity of our collections with acquisitions by women and artists of color,” said HoMA Director and CEO Halona Norton-Westbrook. “We are grateful to the estate of Joyce Stupski, whose generosity made this significant acquisition possible.”

Hung Liu was born in Changchun, China in 1948 and came of age during China’s cultural revolution. After studying mural painting at the Central Academy of Fine Art in Beijing, Liu immigrated to the United States at the age of 36 to attend the University of California, San Diego. She would go on to teach at Mills College in Oakland, California from 1990 until retiring in 2014. Her work has been exhibited and collected by renowned museums and institutions nationwide. Hung Liu: Portraits of Promised Lands is currently on view through May 30, 2022 at the National Portrait Gallery in Washington D.C., and Hung Liu: Golden Gate is on view through August 7, 2022 at the de Young Museum in San Francisco. Liu passed away from pancreatic cancer Aug. 7, 2021.

Posted by Jacklyn Polaco on December 23 2021