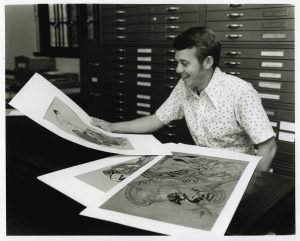 We are sad to announce the passing of Dr. Howard Link, former Senior Curator of Asian Art and beloved member of the HoMA ‘ohana, on January 1, 2022 at the age of 87.

Born December 18, 1934 in Rochester, New York, Howard was raised in Philadelphia, Pennsylvania. As his family was affiliated with the Religious Society of Friends (Quakers), Howard received his secondary school education at one of the city’s prestigious Friends Schools. He studied as an undergraduate at the University of Pennsylvania. In 1969, he received his Ph.D. in Art History at the University of Pittsburgh, and he wrote his dissertation on the topic of Japanese ukiyo-e printmaking.

By 1971, Howard was employed as keeper of the James A. Michener Collection at the Honolulu Academy of Arts, as HoMA was then known. Promoted to Senior Curator of Asian Art three years later, Howard’s duties largely revolved around James Michener (1907–1997), an author whose collection of short stories Tales of the South Pacific (1947) won a Pulitzer Prize, was adapted into an award-winning Broadway musical, and further inspired an Academy-award-winning film. Such commercial success encouraged Michener to indulge in his passion for Japanese prints. In 1954, Michener published an art-historical survey entitled The Floating World, and the following year, he began to accumulate an impressive, ever-expanding collection that included Hokusai’s The Great Wave Off Kanagawa. At the time, Michener’s writing projects were mostly focused upon the histories of small communities throughout the United States, and such research demanded that he travel constantly. Daunted by the idea of caring for fragile works on paper while pursuing such an itinerant lifestyle, he decided to entrust the Honolulu Museum of Art with his prints in 1955. Cultivating the museum’s relationship with Michener was Howard’s primary duty, and he succeeded beyond anyone’s expectations. Throughout the rest of his life, Michener consistently donated Japanese prints to HoMA on an annual basis. The 6,102 acquisitions that made the Honolulu Museum of Art’s collection of Japanese prints the third largest in the United States resulted mainly from Howard’s unflagging dedication.

Howard’s passion for Asian art was clearly evident in at least nineteen books that he published over the course of his career. Highlights of that bibliography include The Art of Shibata Zeshin: The Mr. and Mrs. James E. O’Brien Collection at the Honolulu Academy of Arts (1979), The Feminine Image: Women of Japan (co-authored in 1985 with Sanna S. Deutsch), Primitive Ukiyo-E from the James A. Michener Collection in the Honolulu Academy of Arts (co-authored in 1980 with Jūzō Suzuki, and Roger S. Keyes), and Exquisite Visions: Rimpa Paintings from Japan (co-authored with Tōru Shimbo in 1980). His willingness to collaborate with other scholars led to numerous travelling exhibitions and bilingual publications that dramatically enhanced the museum’s international reputation. At the same time, he never forgot his allegiance to the museum’s local community, curating such commemorative events as Hawaii Celebrating 100 Years of Japanese Immigrants, Kanyaku Imin Centennial Invitational Art Exhibit at Spalding House in 1985. His professional dedication was further complemented by his humility and generosity. “Howard Link is a warm, outgoing individual who interacts freely with everyone with whom he comes into contact,” wrote Director George R. Ellis on the occasion of Howard’s retirement in 1987. “He gives of himself in the same way that he approaches his work—with enthusiasm and dedication.”

After his retirement, Howard continued for several years to maintain his relationship with James Michener and to steward the Michener print collection. In a similar way, he continues today to inspire curators at HoMA who follow in his footsteps and try to honor his legacy.

Howard is survived by his long-time companion Patti Weare (89) of Palos Verdes Estates, California; and his sister-in-law Ruth Link (91) of Philadelphia, Pennsylvania.

Posted by Jacklyn Polaco on January 7 2022